As of the interim report for the fourth quarter of 2018, SSM Holding AB (publ) will apply a new accounting principle for housing development through housing associations. The new accounting principle means that housing associations will be included in SSM’s consolidated accounts and that the profit or loss from completed projects will be reported at the time when the individual purchaser of a cooperative apartment takes possession of the unit. These changes do not affect the company’s project development process or financial targets.

As stated in SSM’s interim report for the third quarter of 2018, Nasdaq Stockholm initiated a dialogue with listed housing developers regarding the application of IFRS 15 and the grounds for assessing whether housing associations are independent or not. On December 10, SSM received Nasdaq’s final conclusions, which included criteria for the assessment of housing associations’ independence and consolidation.

IFRS is a principle-based regulatory framework, and its application requires assessments that may often lead to different possible conclusions. To date, SSM has been of the opinion that housing associations are independent, and SSM has therefore not included them in the consolidated accounts. SSM’s accounting principles for housing development through housing associations have also been described in the company’s financial reports. In the light of the new presumption expressed by Nasdaq, SSM has decided to adapt its accounting for housing cooperative projects and apply the changes retroactively, starting with the interim report for the fourth quarter of 2018.

To visualize the effects of this adaptation, recalculated summary income statements and balance sheets with accumulated outcomes as of the third quarter 2018 and for the whole year of 2017 are provided below. In 2017, the balance sheet was considerably impacted by several housing cooperative projects in production under SSM’s own management, which did not occur to the same extent in 2018, as the housing cooperation projects in question were completed. The change in the company’s profit for 2018 is a consequence of the high proportion of completed housing cooperative projects during the year. 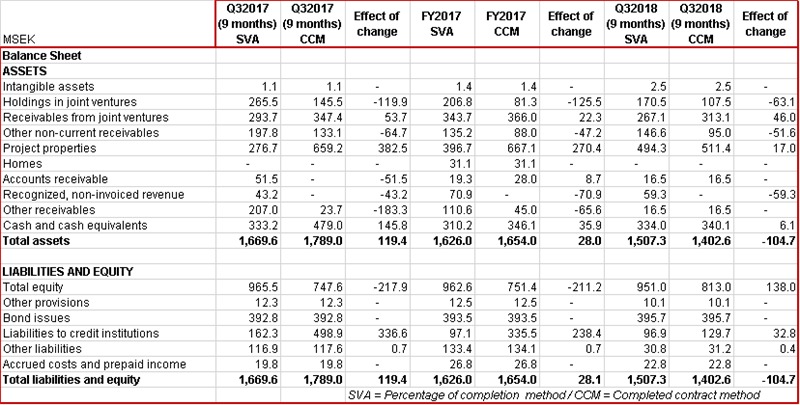 The information in this press release is such, which SSM Holding AB (publ) is obliged to make public pursuant to the EU Market Abuse Regulation and/or the Swedish Securities Market Act. The information was submitted for publication, through the agency of the contact person set out below, at 07.30 CET on February 6, 2019.

About SSM Holding AB (publ)
SSM produces functionally smart and affordable homes with attractive common areas, close to public transport and the city center for the company’s target group – the urbanites of tomorrow. The company envisions a housing market that is accessible to as many people as possible and aspires to produce 50 percent cooperative apartments and 50 percent rental units. SSM is the leading property developer in its niche within the Greater Stockholm area and at year-end 2018, the company has approximately 6,500 building permits in its portfolio. SSM has been listed on Nasdaq Stockholm (Small-cap) since April 6, 2017. www.ssmlivinggroup.com

You have the right to withdraw your consent at any time by clicking ”unsubscribe” in the newsletter or by contacting us at [email protected].

Please note that the withdrawal of consent does not affect the lawfulness of processing based on consent before its withdrawal. The personal data is stored as long as you consent to the processing.

Investor Relations and Head of Sustainability